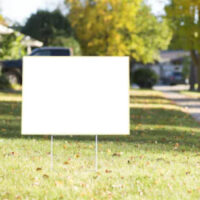 The United States has seen its share of issues this year, from the coronavirus to racial tension to political drama. Many people like to express their feelings through signs. Many people have signs in their yards proclaiming their political views as well as stances on controversial issues.

While this practice is OK in many neighborhoods and rural settings, those who live in areas governed by homeowners associations (HOAs) are often restricted from doing so. HOAs have a lot of strict rules regarding what residents can do on the outside of their homes. They are restricted from painting their homes, placing certain yard decorations outside and many other things. They may be restricted by how many cars they can have and what type of pets they can have.

Because the rules are so restrictive, many homeowners have disputes with their HOAs. HOAs are known to favor certain homeowners and impose rules that are not even in the guidelines. They are also known to improperly manage funds.

Sign issues are especially common. In Texas,  there have been battles over signs as people proclaim their stance on hot topics such as Black Lives Matter and politics. These signs are not allowed by the HOA. even though the bylaws allegedly do not mention signs or flags.  Even lawyers have gotten involved, calling the signs “unlawful, noxious or offensive activity” and forcing them to be removed within one week. Some homeowners have tried to go around the laws by spray painting messages on their driveways, but the HOA is still asking them to be washed away, as positive or negative messages are considered unacceptable.

The main problem is that there are signs in the neighborhood. Many support Donald Trump, while others place college flags, fall harvest flags and American flags in their yards. It’s not fair to single out one or a couple homeowners. All should abide by the same rules.

When a homeowner disagrees with the HOA, they should first try mediation to come to an agreement. That’s because the homeowner will still be involved with the HOA, unless they decide to move out of the neighborhood. Therefore, it’s best to keep things amicable. Arbitration is another option, in which a third party decides the outcome. If the homeowner is still not happy, they may decide to file a lawsuit. It’s possible that the parties could come to an agreement outside of court. If not, then it will require litigation and a judge will have to decide.

HOA laws can seem petty, especially when an association is upset over something as minor as a sign. However, the HOAs create the rules and as a homeowner, you must abide by them, no matter how insignificant they may seem to you.

Fort Lauderdale HOA dispute attorney Edward J. Jennings, P.A. can help you resolve any issues you may have with your homeowners association. He can help you understand the options you have besides litigation. Schedule a consultation today. Call our office at 954-764-4330 or fill out the online form.