How Not to Apologize To Your Spouse 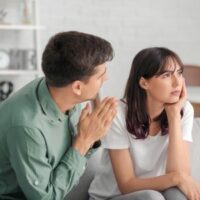 Relationships aren’t easy. There are a lot of elements involved. One of the hardest things about being in a marriage is having to apologize. Whether you’ve done something wrong or said something you shouldn’t have said, you’ll need to say “I’m sorry” at some point.

However, uttering those two words isn’t as simple as you may think. Apologizing is almost like an art form. Saying how sorry you are has to be done properly or else the apology is worthless. Apologies require the right words, tone, and demeanor in order for them to be considered genuine. So when you make a mistake, make sure you avoid certain phrases and word choices if you want to avoid a divorce.

Avoid This Phrase: “I’m Sorry You Were Offended”

Hey, at least you said you were sorry, right? Wrong! By using this phrase, you show that you are feeling defensive. Instead of offering a heartfelt apology, you are blaming the victim. They’re the ones who are offended and you’re failing to acknowledge their feelings – in fact, you’re making light of the situation. In turn, this makes your apology pretty much useless.

Don’t tell your partner you’re sorry and then use “but.” By using “but,” you’re making excuses for why you made the mistake. You don’t want to do that. That pretty much cancels out the apology. Instead of blaming the other person, use “I” statements. This will help clarify everything and avoid a huge argument.

You’re the one who made the mistake, so you’re the one who needs to take responsibility for your actions. You need to understand that you did something wrong, so don’t try to point fingers. Don’t turn the tables around and blame your spouse. If you truly value your marriage, you’ll swallow your pride and admit you were wrong with a heartfelt apology.

So how do you apologize? By being sincere. Trying to be sarcastic or snarky about it won’t do you any good. You need to truly recognize that you made a mistake and say you’re sorry. It doesn’t matter whether or not the mistake was intentional. Even if you didn’t mean for it to happen, you need to give your spouse an apology. You need to be genuine about it and that means making sure the mistake doesn’t happen again. Overall, you need to be thoughtful about your actions and apologize in a way that shows you understand what you did wrong and you care about how it affected your spouse.

You’ll need to say you’re sorry at some point in a relationship. Make sure you do it the right way to avoid damaging your marriage.

But if the damage is already done, count on Fort Lauderdale divorce lawyer Edward J. Jennings, P.A. to guide you through the divorce process. To schedule a consultation with our office, call 954-764-4330 or fill out the online form.