How To Be A Good Father After Divorce 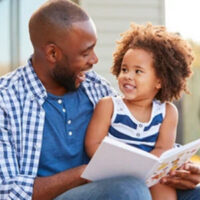 While many people have fond memories of their dads, many do not. They are often children of divorce who lived with their mothers and saw their fathers rarely, if at all. Maybe their fathers ended up in jail, suffered from substance abuse, struggled with mental illness, or just didn’t want anything to do with them.

It’s a sad situation when only one parent is involved in a child’s life. It often makes a child feel inadequate, insecure, and even worthless. Children often do better overall when they have both parents in their lives, but this is difficult when mothers often have primary child custody and are doing the majority of the child rearing.

If you’re a man with children, it’s important that you do the right thing and stay involved in your child’s life, even after divorce.  While being a parent is challenging in any situation, parents need to be the adults. They need to face the challenges and be there for their children and be good role models. Here are some ways in which men can be good fathers after divorce.

Get Your Anger and Guilt Under Control

Parents must deal with the emotional issues that come with a failed marriage, and the two main emotions involved are often anger and guilt. While men tend to hide their feelings, many fathers are guilty of being angry and filled with guilt after their divorce. Some blame themselves for what happened, while others get angry at their wives. These emotions often spill over into their relationships with their children, and this drives a wedge between the children and their fathers. Therefore, it’s important to get these feelings under control.

Be Mindful About Post-Divorce Relationships

Children have feelings and they are likely upset about the divorce. They need time to grieve and heal. Some men are quick to move on after a divorce, and they don’t always think about how their children will feel. A new relationship or subsequent marriage can leave children feeling jealous and even unloved. This is especially true if their father has children with a new woman. The children will feel as if they are being replaced. As a father, you need to realize that you still have legal obligations to your older children, so don’t neglect them.

Your children are not just visitors. Even if they only come to see you every other weekend, they still live with you, so treat them as family. Also, keep in mind that you are not their friend; you’re their father. Therefore, you need to teach them manners and rules. Give them responsibility. Another thing to remember is that there is no such thing as being a part-time parent. You’re a full-time dad, so aim to spend regular time with your children.

Being a parent is not something that should be taken lightly. It is a huge responsibility and there are often many challenges involved, especially after a divorce.

Fort Lauderdale child custody attorney Edward J. Jennings, P.A. can help you with parenting and custody issues after a divorce. To schedule a consultation, fill out the online form or call 954-764-4330.