How to Deal With a Breach of a Business Contract 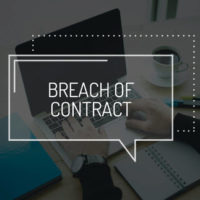 A breach of contract in business has the potential to be costly and financially devastating, especially for smaller organizations. If a client, partner, investor, or anyone else you have a working relationship with violated a written agreement, you have the option to sue the offending party. While not all violations are worth filing a lawsuit over, there are others that are. If the breach caused you to lose money in any way, or if it caused a rift between you and a third party (such as another customer or vendor), you should consult with a Fort Lauderdale business litigation lawyer about what you should do next. However, this post should give you an idea of what to expect before you contact an attorney.

Defining a Breach of Contract

Not everything a person or entity does that dissatisfies you is a breach of contract. A breach of contract has to be to an act or non-act that is in direct violation of the written agreement. For instance, if you hired a freelancer to create a website, and in the contract you stipulated that he or she would receive 25 percent of the total payment upfront, another 25 percent once specified milestones were met, and the remaining 25 percent upon final approval of the project, and he or she collected the initial 25 percent of payment but then never got passed the completion of the first milestone, he or she would be guilty of violating the contract. On the other hand, if you make it impossible for the freelancer to satisfy the job outlined in the contract, you could be held liable for breach of contract.

Depending on the violation, a breach of contract can be so minimal that it goes unnoticed, or it can be so significant that it results in financial loss and hurt business relationships. Bearing that in mind, most small claims courts will only hear a breach of contract suit if it meets the criteria for one of the following four types of breaches:

In addition to ensuring that the breach meets one of the above set of criteria, you also need to establish a few facts in order to have a credible case to present in small claims court. The four facts that you must verify include:

More often than not, individuals who sue for breach of contract generally just want to be compensated for money lost and move on. However, some breaches result in much more headache than merely lost money, which is why the courts provide for different types of remedies. Some common monetary remedies awarded in breach of contract suits include:

Oftentimes, a breach of contract results in more than just monetary loss. When this occurs, the court may award one of the following types of damages: