Misrepresentation and How it Impacts Contracts 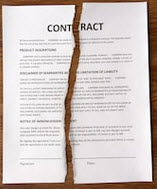 Starting a business is a long process. You have just started working with a vendor, who you signed a contract with when you realize they have misrepresented themselves. What do you do now? The process of rectifying a contract that includes misrepresentation can be complicated, but at the office of Edward J. Jennings, P.A., we are experienced in working with breach of contract cases and will work to make this process as painless as possible for your business.

Misrepresentation occurs when a contract is entered into based upon agreed upon terms, but those terms later turn out to be untrue. Misrepresentation can take on several forms. Someone misrepresents themselves when they knowingly provide false information to someone that results in a contract being signed. There is a responsibility of both parties to provide all parties that will be impacted by the contract with complete and correct information.

Misrepresentation can also occur when someone tells a half-truth, while deciding to conceal elements of the facts that may make the partner less likely to have agreed to the deal.

The final way that misrepresentation can occur is when information is not provided. An example of this is a partner knowing that their business was in significant debt, and not mentioning that to a new partner until they have signed a contract.

How Do you Prove Misrepresentation?

There are several steps to proving that you have a contract that contains a misrepresentation. The first is that a valid contract was signed. A contract is not valid, for example, if it is related to illegal activity.

I’m in a Contract with a Partner who Misrepresented Themselves; Now What?

After it has been sufficiently proven that the misrepresentation occurred, you can move forward with legal action to rectify the situation.

When a contract is proven to be based upon false claims, it can be rescinded. In order to rescind a contract, both parties simply return anything they received from the other party. In order for this to be an option, the contract needs to be rescinded as soon as the partner is aware of the misrepresentation.

How Do I Start the Process to Rectify a Contract?

Finding out that you have entered into a deceptive contract can be very frustrating. The first step in fixing a contract with misrepresentation is to contact the Fort Lauderdale breach of contract lawyers at the office of Edward J. Jennings, P.A. We are experienced in dealing with contracts and will work hard to ensure this is a simple experience for you.