Mistakes That Men Make When Going Through A Divorce 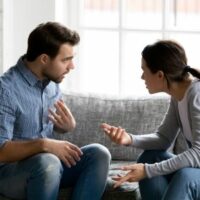 Divorces can be complex. There are a lot of legal and emotional issues involved. Because of this, many people make mistakes, especially if this was their first divorce.

Nobody really knows what to expect. You can read all the articles you want on the subject and talk to people who have gone through a divorce, but the truth is that no two divorces are the same.

While everyone makes mistakes, men tend to make the same ones. It partly has to do with their biology as well as how they are raised. They are taught to be tough and never cry. They need to act in a masculine manner. They are brought up to think they can handle anything that comes their way.

While it’s good to have this confidence in some situations such as in the workplace, selling something, or dealing with tough situations, it’s not good for relationships. Being disconnected from your emotions can be destructive and cause a lot of problems in a marriage and divorce. Read on to learn about common mistakes that men make during divorce.

Men tend to cope by using compartmentalization. This is good in some ways, as it allows them to set boundaries. They don’t deal with the feelings of others. In a divorce, this can be difficult for the woman. The man appears to no longer care about her. Instead of seeing her as a wife and mother of his children, he sees her as an opponent. Men focus on the financial and business aspects of divorce, which can be devastating to the wife and children.

Being a bully is related to the mistake above. When a man focuses on getting what he wants, he turns into a bully. Going to court only intensifies this, as the courtrooms are meant to be adversarial. Men often enjoy fighting it out, and they will gladly prolong it for as long as possible if they have enough money to do so.

Men focus on winning, no matter the cost. Even if their wife wants to cooperate and divorce amicably, they’ll often refuse to do so because that would make them seem like a loser.

Men are also known for moving on quickly after a divorce because they’re sad and can’t stand being alone. They want someone to keep them company during those lonely nights. They want a new partner to take away the pain.

While there’s nothing wrong with having companionship, men don’t always choose the best partners fresh off a divorce. In many cases, they have new girlfriends before their divorce is even finalized, and this does not solve a man’s loneliness.

When it comes to divorce, everyone makes mistakes. However, men are wired differently from women and often make the same mistakes due to their biology.

Want to avoid these mistakes? Fort Lauderdale divorce lawyer Edward J. Jennings, P.A. can guide you through the process. Let us help you with the important legal issues in a divorce. Call 954-764-4330 or fill out the online form to schedule a consultation.