Physical And Mental Effects Of Divorce 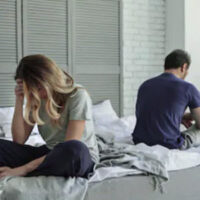 Marriage is supposed to be a great thing, but it can cause a lot of effects. When things aren’t going so great, staying married can be depressing. You may feel sad or angry a lot of the time.

However, you may have heard horror stories about divorce. Divorce has long-term effects and is often compared to death. In a way, a divorce is the death of a relationship. It can be devastating, especially if you have been married for a long time.

It’s not uncommon for it to take a long time to heal from a divorce. It could be a year or two before you settle into your new life after a divorce. You may be feeling anxious, depressed, or lonely. But if the feelings don’t subside after a few years, then it may be time to seek professional help.

We often think about how divorce will affect the kids, but the truth is that divorce can cause a lot of physical and mental effects for the adults involved as well. Here’s what you need to know.

While both men and women suffer dramatically from a divorce, men tend to suffer more. While both divorced men and women get more colds and cases of flu than those who are married, divorce men are more likely to get cancer and heart disease. Divorced men also suffer more heart attacks and strokes than men who are not divorced. That’s because marriage tends to offer health benefits. In fact, the mortality rate for divorced men is nearly 250% higher than with married men.

Like men, women have an increased risk of heart attacks after a divorce and this risk increases dramatically if they divorce multiple times — from 24% to 77%.

Women also tend to experience more stress after a divorce. This is likely due to financial problems. Plus, women are likely to have an identity crisis after a divorce. While married, women identify as a wife and mother. They often lose these identities and this causes a lot of stress. This stress causes high levels of inflammation, affecting the immune system and the cardiovascular system.

Many people decide not to go through with a divorce because they’re well aware of the possible effects. A divorce is almost as emotionally draining as the death of a loved one.

If you do decide to move forward with ending your marriage, Fort Lauderdale divorce lawyer Edward J. Jennings, P.A. can guide you through the process with ease. To schedule a consultation, fill out the online form or call 954-764-4330.