Rapper Tyga Sued For Breach Of Contract Over NFTs 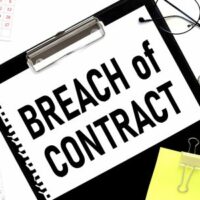 Contract breaches are not things that happen to small businesses and average citizens. Large businesses and celebrities can be equally involved and affected.

Take, for example, rapper Tyga. Tyga had signed a contract to create and promote non-fungible tokens (NFTs). He was supposed to create digital art offerings based on his image and likeness. The 32-year-old rapper agreed to the contract, receiving a $100,000 signing bonus. But then he “ghosted” on the project, which was worth $500,000.

Tyga was supposed to partner with Kreation to create a contemporary CryptoArt project entitled  “‘Ten Thousand TYGA.” The project was announced in June and would consist of three drops: one with 10,000 unique NFTs, one with 75 unique NFTs, and a single exclusive one to be sold to one buyer. The unique NFTs were inspired by tombs of ancient pharaohs with a techno-futuristic vibe.

Kreation was expecting Tyga to promote the drops using his status and public following, but he never pulled through. Instead, Tyga did the opposite, canceling media interviews on Twitter’s Spaces and Reddit’s ‘Ask Me Anything forums. He also failed to post about the project on his social media pages, including Instagram and Twitter.

The auction was supposed to start June 17. Tyga was contracted to facilitate the creation, production, marketing, and sale of NFTs in exchange for the use of his name, likeness, image, music, and artwork. When the deal fell apart with Tyga, Kreation said it caused issues with a new strategic partner they used as an NFT marketplace.

What is an NFT?

NFTs are the new trend, but what is it? An NFT is a unit of data that is stored on a digital ledger called a blockchain. NFTs are associated with a particular digital or physical asset, like art, images, and music. They come with licensing rights to use the asset for a specified purpose. NFTs can be traded and sold on digital markets. NFTs are different from cryptocurrencies, as each NFT has a different value.

Ownership of NFTs can be confusing, though. An NFT represents proof of ownership of a blockchain record, but not necessarily intellectual property rights. It is possible for someone to sell an NFT that represents their work, but the buyer will not necessarily receive copyright rights. This means that the seller may still be able to create additional NFT copies of the same work unless the copyright is explicitly transferred.

The use of NFTs has grown dramatically since they were first introduced in 2014. In 2021, NFTs were a $17 billion industry.

When you agree to do something, you need to hold up your end of the bargain, especially if there is a contract involved. Otherwise, you could face legal action, as well as fines and other penalties.

Dealing with contact disputes? See how Fort Lauderdale breach of contract lawyer Edward J. Jennings, P.A. can help. Schedule a consultation today by calling 954-764-4330 or filling out the online form.